The Different Types of Damp and How to Fix it 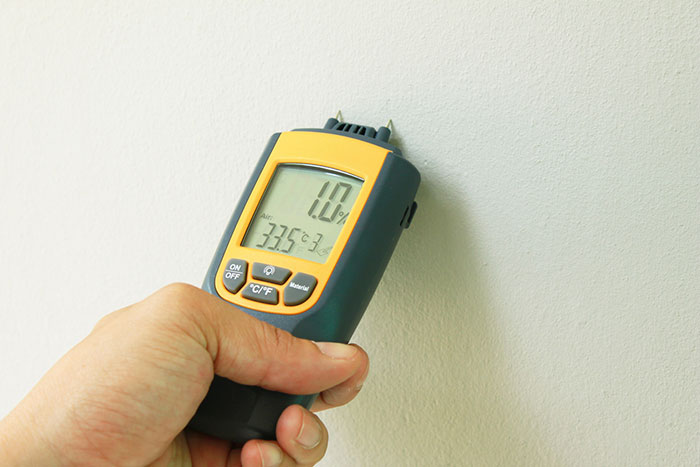 Melbourne is filled with beautiful, architecturally remarkable heritage homes, some of which date back to the early 1800’s. Rich is history and character, period homes are highly sought-after for their unique, old-world beauty, however, most lack the contemporary functionality that modern Melbournians need and want. Due to their age, many old houses are also plagued by hard-to-fix problems including rising damp, penetrating damp, poor ventilation and condensation. At Duncan Thompson Extensions, we are specialists in heritage home extensions in inner, eastern and bayside Melbourne suburbs including Hawthorn, Glen Iris and Brighton. We often encounter dampness in our projects, read on to learn more about the different types and how it can be rectified.

Occurring when water leaks through masonry walls, this is usually caused by structural problems in a dwelling, such as faulty guttering, roofing or alterations.

Signs of penetrating damp include patches on walls, ceilings or floors, which may darken when it rains. You’re more likely to get penetrating damp if you live in an older building with solid walls, as cavity walls provide some protection. Other signs may include:

– Water leaks along the wall or from the ceiling

The hardest part of resolving penetrating damp is finding the source of the issue. Start by inspecting gutters, downpipes, flashing, rendering and window frames and make sure that downpipes are unobstructed. Once you’ve found the fault, you can engage a builder to perform the repairs.

Most commonly found in older homes and buildings, rising damp is where salty ground water moves up or rises through a brick or masonry structure such as a wall. Stone and brick are porous and as such, they can act like a sponge drawing water up from any wet soil or surface below. The common causes of rising damp are a missing damp course (horizontal barrier in the wall), or the deterioration of the damp course layer due to age.

Signs of rising damp may include:

– Paint flaking from the wall

– Tide marks and stains appear on the walls

– Mortar frets and falls out between bricks and stonework.

As rising damp is caused by water moving up through walls, it will always be at the base of a wall rather than at the top.

The only way to solve the problem of rising damp is to replace the damp course. This is done by a damp specialist, they will drill holes in your wall and inject damp-proof silicone, liquid or cream. It is installed at floor level and will not allow for any moisture to rise above the walls any longer. In the case of a home extension or renovation, any new foundations will be built to ensure rising damp will not be a problem in future.

Condensation is the most common kind of damp and is caused by moist air condensing on cool surfaces such as walls and windows. It is caused by two main reasons – damp air due to a lack of ventilation within the home, especially within old buildings, or extreme temperature fluctuations inside the house.

– Water droplets on windows or walls

– Mould on walls and ceilings (particularly in corners)

If you have a problem with condensation, the easiest and cheapest way to stop it is to equalize the temperature between the inside and outside of your home. There are a few ways this can be done:

– Increasing the breathability of the building with added ventilations (especially in older houses).

– Reducing the extreme fluctuation of temperature of internal walls by adding insulation to the home.

The team at Duncan Thompson Extensions is highly skilled and experienced in heritage home renovations and extensions. If dampness has become a problem for you, it might be time to renovate your home to get rid of the problem for good, and give your outdated old home a fresh, new and modern feel. Call us today on (03) 9865 8655 or get in touch with us online now.